The fundamental engineering principles behind timekeeping 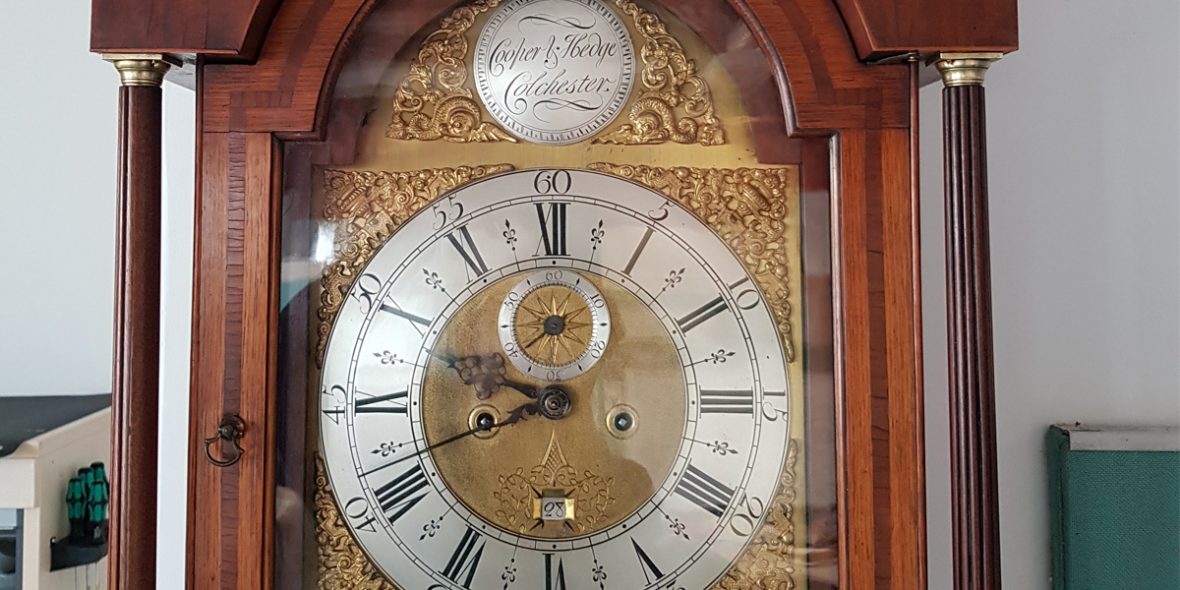 It’s probably true that most people in the developed world would once have owned a clock or a watch.  These household items that are now often taken for granted were once critical to the development of our industrialized nations, as the development of timekeeping technology triggered a revolution in navigation, trade and human mobility.

But do you know the fundamental mechanical principles that are leveraged to power our everyday clocks and watches? There have been several notable “landmark” innovations that have brought us to the common accessories on which we rely.

Between the 17th & 19th centuries most clocks were powered by gravity acting on weights.   The weights were either visible hanging down underneath the clock if wall mounted (as with early “Lantern Clocks”) or hidden within a long case if floor standing, such as in my Long Case (“Grandfather”) clock dating from 1735:

The amount of energy available to power the clock is a function of the mass of the weight and the height through which it is raised by winding, as expressed by this simple formula:

Once the weights are raised, gravity does its thing and the resulting force on the chord suspending the mass is translated to a torque by virtue of it being wound around an arbour with radius s.

The resulting torque is used to drive the hands through a series of gears known as “wheels” that act as a gearbox to enable the clock to run for longer periods of time.

Fortunately for us, the force exerted by gravity on a mass (i.e. its weight) can be considered to be constant at any height, so critically the torque that powers the clock is the same for the full drop of the weight.  This conveniently ensures that the clock runs at the same speed from the beginning to the end of the wind, and at all times in-between.

Now consider the practicalities of taking your clock somewhere with you.  Clearly, you cannot use gravity to power your portable timepiece else you may trip over the dangling weights!  One convenient answer is to wind-up against a (torsional) spring instead to provide power to drive the clock movement.  This stores energy just as winding against gravity does, but (and here lies the problem) unlike gravity the torsional spring does not apply a constant torque as in unwinds (see figure).

The graph above illustrates how if a clock was powered by a wound spring it would get maximum torque initially and then progressively less as the spring unwinds.  This would result in the clock “running fast” at first and then slowing dramatically over time.   Clearly not very useable for timekeeping.

Engineers developed an ingenious solution to combat the issue of non-linear torque from a torsion spring as far back as the 17th century in the form of the “Fusee” (meaning “spindle” in French).  The Fusee is essentially a cone with changing radius to exactly counteract the torque curve from the torsional spring as the spring unwinds, as depicted in the following graph.

With the Fusee and the torsional spring (which is inside the barrel in this photo) working together, the net torque out of the system is constant throughout the full wind cycle. Clever eh?

The beauty of this system is that once the output torque curve of the torsional spring is characterized it is “hard programmed” into the machined profile of the Fusee and thereafter is not subject to change, so long as the fuse chain follows the intended path around the fuse.  Distinct grooves are machined into the Fusee to ensure that this is always so.

Although effective and reliable, the Fusee device does not lend itself to miniaturization and so its size makes it impractical for watches (see example of early pocket watch, below).  However, Fusee movements were still in use in high quality wall-mounted or sideboard clocks well into the 1950s.

Nowadays, from slim & elegant dress watches to large clocks, almost all mechanical (non-electronic) movements use a form of Anchor Escapement.  The Anchor Escapement is so called because it has the appearance of an anchor which rocks back and forth on an axis to allow a driven wheel to release (or “escape”) just one cog at a time.   All we need now is to regulate the speed of the rocking back-and-forth and we potentially have an accurate timekeeping device ……. enter our pendulum.

The pendulum of a clock has a very fortunate but important attribute: for small angles of pendulum swing the interval of time for each oscillation (the Time Period) is approximately a function of the length of the pendulum and the acceleration due to gravity.

Gravity is not changing any time soon, so the speed of the clock can therefore be held constant by a swinging pendulum. The period can be regulated by shortening or lengthening the pendulum to make the clock go faster and slower respectively.  So far, so good.

The trouble is that just with hanging weights, its not very practical to have a pendulum swinging from your portable time-keeping device. What we need is something small and self-contained that is unaffected by attitude & orientation.

So how does this set-up translate to watches?

Watches and smaller clocks do not use an oscillating mass in the form of a pendulum but instead a rotating mass called a “balance wheel”.  The balance wheel is not returned by gravity like its straight counterpart but by a small torsional spring instead, sometimes known as a hairspring.  Like the pendulum, the balance oscillates back and forth, with the effective length of the spring governing the time period.  The length of the spring can be altered by moving a simple pinch-point along the spring to effectively reduce or increase its length, just like with the pendulum.

The balance bearings are so efficient that the balance system is unaffected by gravity and so the watch can be worn at any attitude without any noticeable difference in performance.  There are, of course, mechanical losses in the system but these losses are minimized through the development of highly efficient contact geometry and the use of very low friction contact materials such as natural and more recently, synthetic rubies.

The middle of the 20th Century heralded the hay-day of mechanical watch technology, after which time Quartz movements have dominated the market through delivering better performance at a (much) cheaper price. Today mechanical timepieces are mostly the preserve of the luxury-end of the market, where they represent tradition and the highest levels of quality and craftsmanship. To some of us there is still something endearing in an all-mechanical, highly evolved precision machine that uses principles that have truly stood the test of time. Literally.

For more on the principles of great design and how we use these in our engineering services, call us now on Tel: +44 (0)1277 261066 or email us at info@warleydesign.co.uk