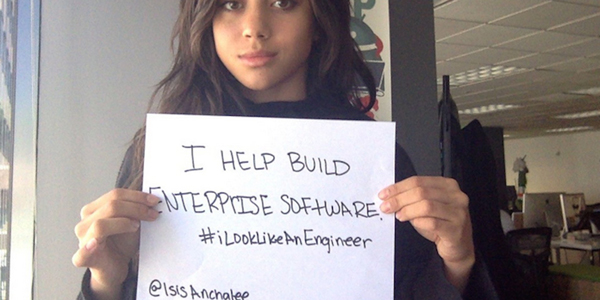 The experience of one female engineer and the power of social media is helping to dispel the myth that all engineers are men.

Thousands of women working in engineering, science and computing have tweeted photos of themselves to the hashtag #iLookLikeAnEngineer explaining what they do for a living to try and break down gender barriers that exist in their sectors.

They have been inspired by Isis Anchele, a 22-year old software engineer from San Francisco and one of four employees at a firm called OneLogin who recently appeared in recruitment ads depicting people who work at the company.  As a result of her ad, Isis says she received a lot of “positive and negative attention” – on the negative side comments were posted on social sites about her appearance and doubting her credibility as an engineer.

In response Isis took to blogging site Medium to express her shock.

She wrote: “I didn’t want or ask for any of this attention, but if I can use this to put a spotlight on gender issues in tech I consider that to be at least one win.”

She added: “This industry’s culture fosters an unconscious lack of sensitivity towards those who do not fit a certain mold. I’m sure that every other woman and non-male identifying person in this field has a long list of mild to extreme personal offenses that they’ve just had to tolerate.”

Her hashtag #iLookLikeAnEngineer has now been taken up by women engineers from across the world and Isis’ story covered by leading newspapers. Isis is also in the process of developing a team to build a website www.ilooklikeanengineer.com , where people are invited to post their stories and experiences relating to diversity issues in the tech sector.

A trawl through the #iLookLikeAnEngineer site is truly inspiring and gives a real view of the broad scope of women engineers from all disciplines working in the sector today. It can only be hoped that out of what was a negative experience for one young women engineer can come real progress in terms of changing attitudes and encouraging more women to consider engineering as a viable career.