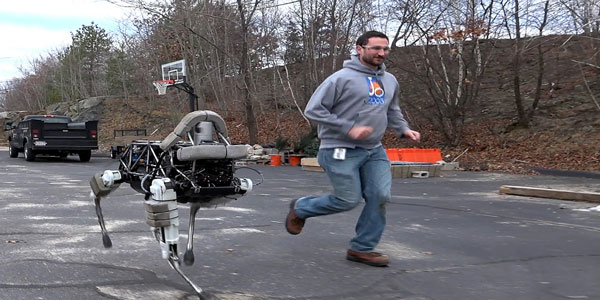 Regular readers of our blogs will know that, here at Warley Design, we have a particular penchant for charting the latest developments in artificial intelligence and robot design.

Bearing this in mind, we thought we would share one of our favourite videos of the year featuring the most recent creation to come out of Boston Dynamics, an innovative engineering and robotics design company based in Massachusetts, US and owned by Google.

The video features a prototype of a robot called Spot – an incredible four-legged robot that can run, climb stairs and negotiate rough terrain and hills. It can even survive being kicked as this video shows – the way it rights itself eerily aping the real-life movements of an animal like a dog or deer.

Spot is a smaller version of the company’s trailblazing Big Dog robot that was funded by the Defense Advanced Research Projects Agency (DARPA) in the US. The American military is interested in these types of robots for field infantry support. Moving at 4mph and able to carry heavy loads, it is easy to see how Spot and Big Dog could offer soldiers help near the frontline.

Both robots have legs that are articulated like an animals, which absorb shock and recycle energy from one step to the next. Their control systems keep them balanced, manage movements across different terrains and inform their navigation.

The videos are awe-inspiring and somewhat frightening at the same time. Spot’s natural movements and speed over rough ground are the most impressive we have ever seen from a robot, and show how far development in this area has progressed.  But what is driving the development?  Regrettably, many advances in science & technology are funded because of war or in the name of its defence, presumably as it provides access to the levels of funding that technology development requires.

It is only to be hoped that a more positive use can be found for such an extraordinary piece of technology.