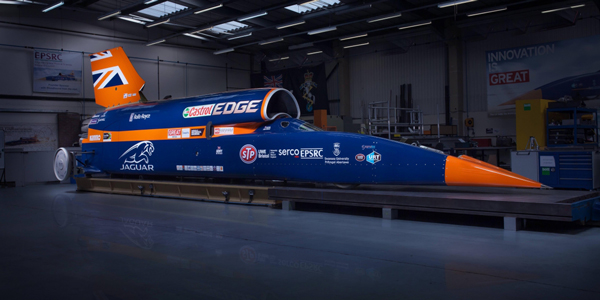 At a recent get-together of engineering professionals, the conversation turned to the exciting Bloodhound project – a bold, ambitious venture, which aims to develop a supersonic car (SSC) capable of breaking the 1,000mph land speed barrier.

To my dismay a fellow professional dismissed the Bloodhound SSC as being “a suped-up racing car”. I was disappointed because the comment demonstrated a lack of appreciation of the scope and magnitude of this stirring undertaking.

I have been following developments at Bloodhound for a while now, and last year was fortunate enough to hear Richard Noble speak about the project that he had started.

This highly-ambitious endeavour is something that only a man like Mr Noble can pull off. He is a pioneer in the world of speed, the driving force behind the famous Thrust2 programme, which brought the World Land Speed Record back to Britain in 1983, and the ThrustSSC, the world’s first ever supersonic land speed record programme.

As he spoke, Noble’s enthusiasm and determination for the Bloodhound project was evident. This really is a project of staggering ambition – the pencilled-shaped car is powered by both a jet engine and a rocket, which together will produce more than 135,000 horsepower: that’s more than six times the power of all the Formula 1 cars on a starting grid put together.

Fuelled by Noble’s vision and the potential to make history, the project has gained momentum and now has thousands of companies, universities and members of the public behind it …… and that, of course, was the plan all along.

Because this venture is really not just about breaking the 1000mph speed barrier in a car. Its objectives are much, much wider than that.

For evidence, see the official Bloodhound web site, which states the project aims to spur the next generation to get involved in STEM topics using the record attempt as inspiration.

In fact, the web site lists the objectives in this particular order:

-Inspire the next generation about science, technology, engineering and mathematics.

-Share an iconic research and development programme with a global audience.

It is revealing and pertinent to see that the goal of the land speed record takes third place behind the other two far-ranging objectives.

As part of his address, Noble explained that the step increase in home-grown engineering talent in the USA during the 1980s and 1990s has been attributed to an upturn of interest in engineering triggered by the Apollo space programme of the 1960s and early 1970s, in particular the Apollo moon landing in July of 1969.

The notion is that a small percentage of the millions of children watching on TV were inspired by what they saw and this had a measurable impact on their future and with it the future of the industry.

It is hoped that Bloodhound will have a similar impact in the UK at a time when the engineering profession faces a looming skills crisis and is struggling to attract talent to the sector.

As guardians of the profession, engineers need encourage as many people as possible to get involved in the Bloodhound project, and to see the initiative for what it is – an opportunity to inspire a generation rather than a commercial venture or a very fast ego trip.